I recently entered the “Great American Bake Sale” charity baking contest organized by the non-profit Share Our Strength to raise funds to help end childhood hunger. The event took place at Le Cordon Bleu College of Culinary Arts in Atlanta in February 2012 and was judged by Tami Hardeman (food stylist/blogger from Running with Tweezers); Mary Moore (founder and owner of The Cook’s Warehouse),  Jennifer Turknett (Dining Team Member for The Atlanta Journal-Constitution), Gretchen George (chef-instructor in Le Cordon Bleu’s patisserie and baking program), and Charles Barrett (Executive Pastry Chef at A Legendary Event and the Professional category winner of GABC 2011). Entries were judged on taste (50%), presentation (25%), and originality (25%). 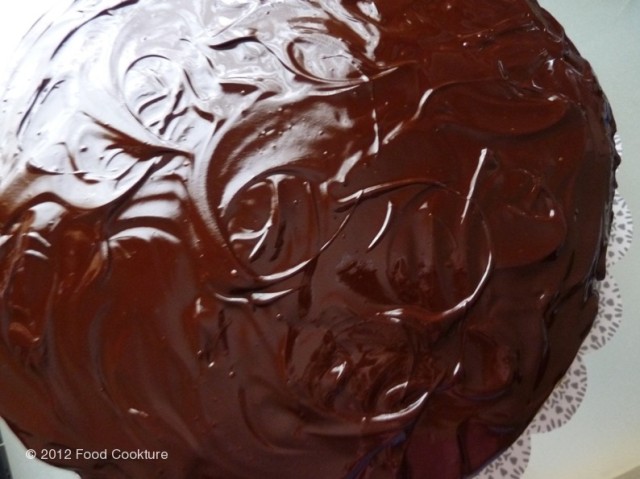 I made three different batches of caramelized walnuts: chopped walnuts for the middle layers of the cake, whole walnuts to decorate the sides as “jewels,” and walnut halves to create a chandelier eff 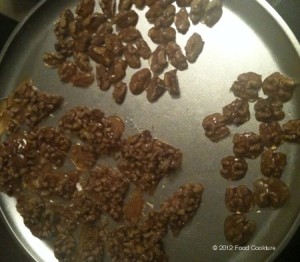 ect connecting to the walnut “jewels.” The amber-color glass-like effect on the walnuts was beautiful. I was very happy and thought it was worth the effort and the time it took to make them; the burned sugar left on my stove-top however, is a different story. Caramelizing walnuts one at a time (so they don’t stick together) can be quite messy as threads of sugar caramel are created once you bring the walnut out of the pan with a fork. And if you are not careful, they break much like little pieces of glass all over your stove. Not fun to clean once burned (takes days by the way).

I then made a sumptuous chocolate cake for top and bottom layers and a rich walnut cake for the middle layer. Each chocolate layer was moistened with a chocolate sauce, whilst the walnut layer with a light citric simple-syrup. Each cake layer was topped with a silky and creamy chocolate caramel I made with condensed milk and crunchy pieces of the caramelized walnuts – which provided a wonderful contrast in texture and flavor. I then poured dark chocolate ganache to glaze the cake and decorated with caramelized walnuts to produce a chandelier effect. The last touch would be the standing caramel decorations on top of the cake (saved until I arrived to the event). 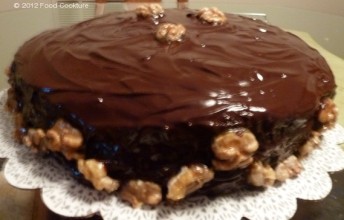 I then drove to Le Cordon Bleu in Atlanta. As I drove, a rush of feelings came over me: I was happy to have finished… exhausted to have worked for 8 hours over 2 days on the cake… thrilled to be a part of such an event… worried the cake would not arrive in one piece… anxious and hopeful the judges would like it. My heart was beating fast with excitement.

Once I arrived, eager to check my cake, I opened the box and my heart sunk: one-third of the top layer of the cake had shifted to the right; it slid off the cake covering the walnut decorations underneath it. I was able to see the layer of chocolate caramel with the pieces of caramelized walnuts – which at this point was only supposed to be seen once you CUT the cake. I took a deep breath, closed the box and without even thinking about what I had just seen, I took my cake inside.

I was in a state of shock and disbelief at what had happened, I’m amazed that I did not cry considering how tired and upset I was. I said to myself: 25% of the presentation points are gone, but I still have a 75% chance. I was betting on the fact that I trusted the cake to be delicious and hoped the judges would agree with me. I was glad at least the caramel decorations made it in one piece, so I could perhaps salvage some of the presentation points.

I entered, signed up, went to Le Cordon Bleu’s kitchen to drop off the cake.  Took another deep breath and had to figure out how to put that cake back in place. I held the left side of the platter with one hand, and tilted the box the cake was in with my right hand. Thankfully for the creamy chocolate caramel filling, it slid right back in place (just as I imagined how it slid out while I was driving!).

It was not the same cake I intended to present at a contest. My beautiful caramelized walnut chandelier had fallen into one big mess created by the chocolate avalanche engulfing part of the walnuts and the rest being shaken into one layer of clustered walnuts. It didn’t look terrible, but the sides looked messy. However I must admit, the cake still looked really yummy and I still wanted a big piece of it. Miraculously the top was unharmed and the chocolate ganache looked beautiful. I then placed the caramel decorations and the cake was exactly what I had envisioned it would look like, from the top anyways.

It was very hard for me to leave a cake for anyone else to see (not to mention culinary judges!) that was far from looking perfect. Until now when I look at the pictures I cringe because I remember how devastated I was at that moment, and what a shame it was the judges did not see the cake before I left my house!

I then left the cake behind and went home. I returned later that evening for the contest. We were allowed to taste everyone’s cakes.  Of course I quickly walked to mine first to have a taste. It was delicious and exactly how I wanted it to be: moist, rich, and the chocolate caramel with the caramelized walnuts added a delightful decadence to the cake. I was very, very happy (at least with how it tasted) and received many compliments; including from the culinary pastry students who also commented on the standing caramel decorations – which made me very proud. It was a fun event but I had a little too much cake for one night.

We were then gathered as Jenn Hobby from Atlanta’s radio station Q100’s Bert Show was to announce the winners. I was so excited to be there not only as a participant, but also knowing I was part of a great charity event for a great cause – it was a nice fun way to raise funds for helping Share Our Strength’s fight for childhood hunger. Every second that went by from the moment we were gathered felt like a long minute. I had butterflies in my stomach and a nervous smile. I was so proud of myself and so confident my cake was delicious and beautiful (despite its non-perfect appearance) that during this entire time, I was really hopeful I would place top three. But something inside me told me I had an amazing cake, no matter what the judging outcome was.

They then announced the winners. I won 2nd place for the amateur category!!! I was SO happy to have won 2nd prize. I could not stop smiling all night!

I learned a lot from this contest. Besides the fact that next time I need to have someone else drive while I carry my cake, I learned that it’s always a great experience to challenge yourself; whether its entering a cooking contest or trying a new recipe you have never tried before. Believe me, the best reward is not a prize, but the fact that you pushed yourself to do something you never thought you would, and be happy and proud that you did, no matter what the outcome.

If a recipe does not turn out the way you expect it to, do not despair. Cooking is supposed to be fun and creative, so as long as what you make is edible, it’s all good.

Hope this inspires you to try something new in your kitchen and have a fun adventure with it!

Alessandra - food blogger at Food Cookture (www.foodcookture.com). Passion for cooking, inspired by cultures and travels.
View all posts by Food Cookture →
This entry was posted in Cakes, Desserts, News & Events. Bookmark the permalink.